On Wednesday morning, the first-ever BuiltWorlds Venture Conference kicked off in Chicago, beginning the day with standing room only in an event space jam-packed with investors and industry professionals. The sold-out crowd brought together a built world community seeking to explore the new age of venture capital and its place in the growing AEC technology space.

“Every morning when I wake up, there’s a new startup in my email inbox,” Jesse Devitte, Managing Partner of Borealis Ventures, said. “You need to be truly objective if the environment is giving you the best shot.” Many early startups, Devitte argued, have a blind spot when it comes to venture capital. The market, the product, and the startup team must be in perfect sync, like a surfer, his board, and the wave he’s riding, according to Devitte.

One company attempting to synchronize those three factors is Rhumbix, one of the BuiltWorlds Madness winners that had the opportunity to present on Wednesday. Zach Scheel, CEO and co-founder, longed for the same visibility of project operations on the jobsite that he had when he was deployed in the battlefield. “Labor is the largest and least understood cost,” Scheel declared, explaining that on the jobsite, he often “didn’t have enough information in a timely manner to make good decisions.” Rhumbix strives to digitize and simplify previously paperbound processes, like timecards, to save countless hours and funds.

“Always be raising,” advised William Akridge of Kiddar Capital during the Industry Players panel. “Come to the table from a position of strength. Set strong milestones, that when you hit then, you can really prove that you have an increase in evaluation. Then, pick your partners well.”

In his construction keynote, Darren Bechtel, Founder and Managing Director of Brick & Mortar Ventures, noted that construction — an industry in dire need of digitization — doesn’t have the money it needs to foster innovation necessary to get projects done on time. With the slowly crippling infrastructure in the US, capital being pushed into the environment, according to Bechtel, isn’t only profitable, it’s necessary. Fortunately, the time is coming for massive change.

“In the last year it’s been a really exciting time,” Bechtel said. “There’s been this wakeup call… only four months ago we saw our first billion-dollar exit.” Viewpoint and e-Builder, Bechtel noted, were acquired by Trimble for $500 million and $1.2 billion, respectively. Oracle has acquired the likes of Textura, Aconex, and Opower with similarly hefty investments.

“We’re in the early innings of one of the single biggest shifts in the history of the US economy,” Roeloff Opperman, Principal of Fifth Wall, said in his afternoon keynote. “The built world is rapidly colliding with technology, transforming the way we interact with our physical environment and influencing the way we live, work, sleep, consume, move, create, connect, and play.”

Opperman made the argument that built industry must learn from previous industries facing similar technological innovation. In a specific example, Opperman showcased Room Key, a company launched by hospitality giants the likes of Marriott, Hilton, and Hyatt to fight the impending threat of Priceline, Expedia, and other booking websites. Room Key lost — miserably. This was a lost opportunity for that industry, Opperman noted, and they thought they could “build it themselves or ignore the trend completely.” Built industry investments can learn from these past shifts in large markets, Opperman said, and invest smarter, seizing opportunities rather than fighting them.

While the conference’s panels took place, investors and startups alike took to the Deal Rooms down the hall.  “The Deal Rooms are an opportunity for some of the startups to meet investors and walk them through their pitch deck one-one-one,” Cooper Smart, the Network Development Leader at BuiltWorlds charged with focusing on venture. “It’s a quick way to connect and broaden your network in the VC space and potentially get introduced to people those investors know, too.”

See some photos from the Venture Conference below! 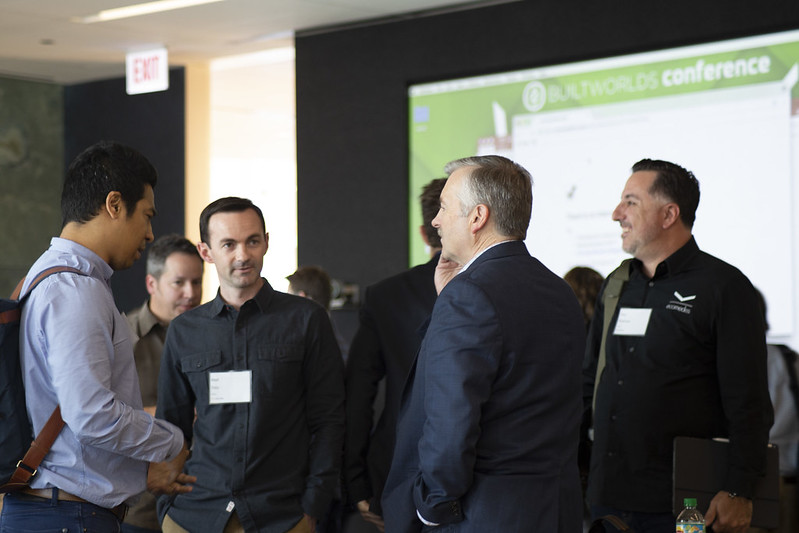